Staging of these tumours prior to commencing treatment is crucial to guide prognosis and treatment and to influence owner decisions regarding treatment options. Tumours can be classified into clinical stages 1–4, which are dependent on a number of factors that will then influence treatment plans recommended for these patients (Table 1). Staging should be determined by a thorough rectal examination to determine size and extent of infiltration into surrounding tissue, and ideally an abdominal ultrasound to check for metastases to abdominal organs and for evidence of lymphadenopathy. Abdominal radiography may also be performed if ultrasound is not available, but this is thought to be less effective at determining the size of lymph nodes when compared with ultrasonography (Bray, 2016). 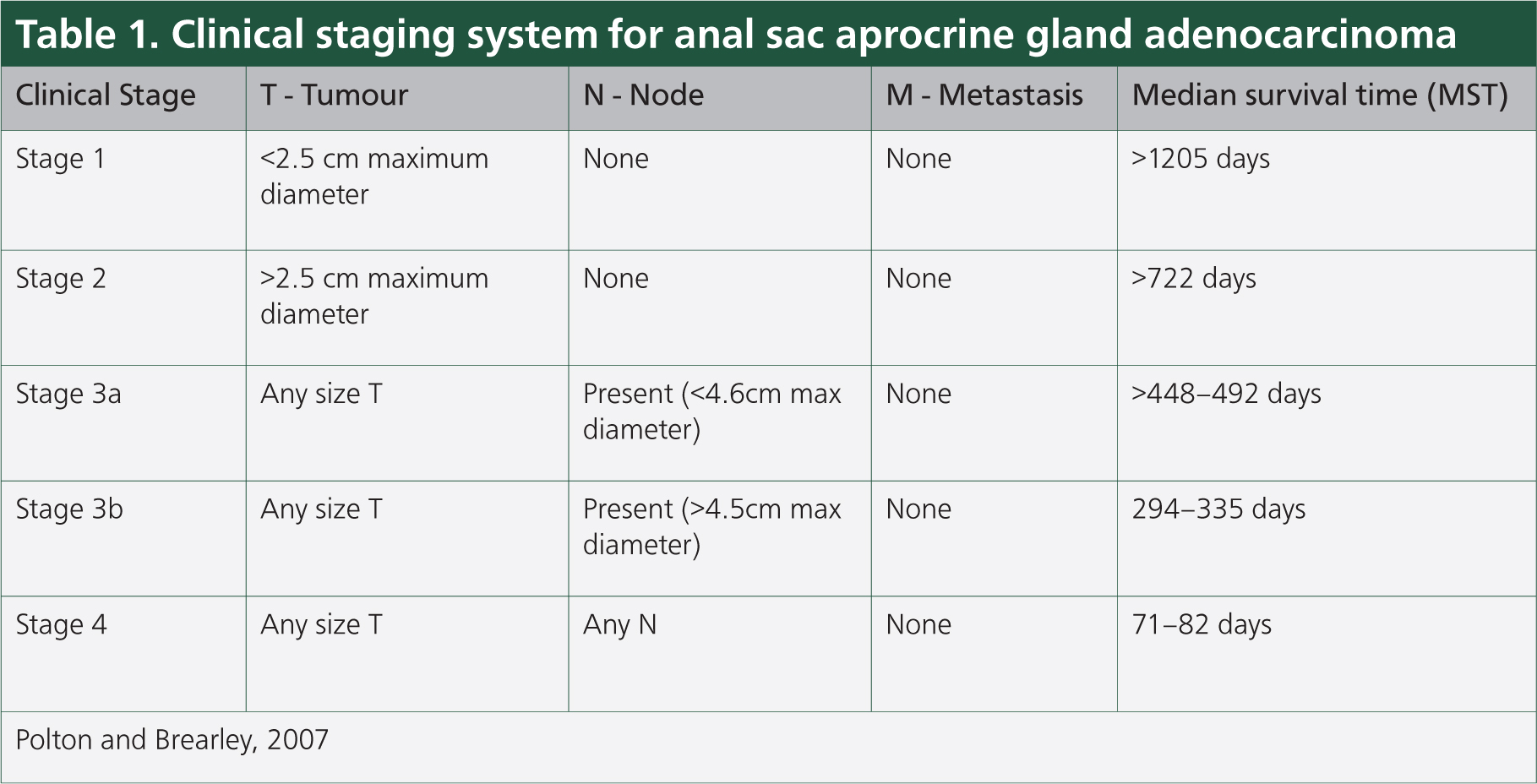 Following a consultation with the oncology and surgical departments, a decision was made to admit the patient for a right-sided anal sacculectomy to remove the primary tumour. Axilla temperature, heart and respiratory rate were within normal limits on admission and thoracic and cardiac auscultation was normal. The patient was anxious, but friendly, bright, alert and responsive, with a body condition score of 5 out of 9. An intravenous catheter was placed aseptically into the left saphenous vein by the registered veterinary nurse (RVN). A routine pre-operative blood sample was taken from the catheter hub to run a complete blood count, biochemistry and electrolyte analysis. Ionised calcium levels were of particular interest in this case, and they were within normal limits at 1.34 mmol/litre (reference range 1.0–1.45 mmol/litre). Haematology and electrolytes were also within normal limits. Alkaline phosphatase (ALKP) and alanine transaminase (ALT) were elevated, with the ALKP reading as 122 U/litre (0.0–25.0) and ALT as 97 U/L (0.0–25.0). This was not thought to be clinically relevant to this patient.

The patient was premedicated intravenously with 0.2 mg/kg methadone (Synthadon, Animalcare) and 2 μg/kg of medetomidine (Sedastart, Animalcare), and induced with propofol (Propoflo Plus, Abbott). A buprenorphine (Vetergesic, Ceva Animal Health) and bupivacaine (Marcain, AstraZeneca) lumbosacral epidural was performed by the anaesthetist to good effect. Surgical management was difficult, which was expected because of the diffuse size of the tumour, with adherence to the rectum and urethra. Careful dissection was performed. A urinary catheter was placed to facilitate postoperative bladder management, as an incision into the urethra was necessary in order to completely excise the tumour as seen in Figure 1. The general anaesthetic was monitored by the RVN without consequence, and the patient's recovery was smooth.

Figure 1. Intra-operative appearance of extensive adherence of the tumour to the surrounding structures. The urinary catheter is visible via the urethral incision.

Nursing care of this patient was of vital importance and encompassed a variety of clinical interventions in order to provide the best holistic care for this case, and while intensive, was rewarding. Pain assessment and provision of analgesia throughout hospitalisation was paramount. If a patient does not receive appropriate analgesia there can be a number of negative effects, including, but not limited to, a decreased appetite and immune function, an increased heart rate and blood pressure, as well as more serious physiological problems such as hyperglycaemia as a result of insulin resistance and release of inflammatory cytokines, which are involved in inflammation and nerve injury (Mathews et al, 2014). Pain scoring was performed every 2 hours using the Glasgow Composite Pain Scale (Reid, 2007) In the peri-operative period methadone (Synthadon, Animalcare) 0.2 mg/kg was administered intravenously (IV) according to pain score. Methadone was chosen in this case as opioids are optimum analgesia according to evidence-based acute pain management literature, and has excellent analgesic effects while causing minimal side effects (Walsh, 2019). If the pain score was more than 2/20 overall, then methadone was administered. 0.1 mg/kg top-ups were required to keep the patient comfortable twice during the initial recovery period. This was as a result of a consecutive pain score over 5/20, despite a 0.2 mg/kg IV dose of methadone 2 hours previously. In this case it was also desirable as methadone (Synthadon, Animalcare) has a wide dose range, meaning additional ‘top-ups’ could be given in order to keep the patient comfortable, without reaching a ceiling effect, which was necessary in this case (Walsh, 2019). This was used in conjunction with meloxicam (Metacam, Boehringer Ingleheim) per os (PO) once daily when the patient was eating reliably, and paracetamol 10 mg/kg PO every 8 hours to create a multi-modal approach to analgesia, which allowed the patient to remain comfortable throughout hospitalisation. Meloxicam, a non-steroidal anti-inflammatory drug (NSAID), works peripherally to reduce inflammation, provide analgesia and also works as an anti-pyretic (Walsh, 2020). The mode of action of paracetamol is unknown, but it is thought to work similarly to conventional NSAIDs by acting at the level of the spinal cord to provide analgesia, and also acts as an anti-pyretic (Walsh, 2020).

Urinary catheter management was of particular importance in this case, as careful handling was required to prevent the catheter from losing patency and causing a uroabdomen through the surgical defect or causing sepsis. Additionally, the act of placing an indwelling urinary catheter can lower the natural defences within the body that work to prevent infection, and so proper maintenance was important (Ackerman, 2016). In order to reduce the risk of infection as much as possible, a strict aseptic technique should be adhered to at all times. Handwashing should be performed before and after handling the catheter, and sterile gloves should be worn (Ackerman, 2016). The urinary catheter should have a collection bag attached in order to accurately record the urine output and appearance of the urine. Interference should be prevented with a buster collar (Figure 2).

On day 4, extremely dark brown urine was noticed by the RVN, and urine output was noted to be poor with a reduction to just 0.37 ml/kg/hour (normal urine output for a well-hydrated patient that is not receiving intravenous fluid therapy is 1–2 ml/kg/hour). A bladder ultrasound scan was performed. This showed that the balloon of the urinary catheter was sitting in the proximal urethra, so this was repositioned using ultrasound guidance into the neck of the bladder. Urine output resolved quickly after this. This highlights the importance of regular recording the volume, colour and turbidity of urine in patients with indwelling urinary catheters, as this can help to identify problems such as misplacement or blockage of the urinary catheter (Bloor, 2018).

Wound management and management of faecal scalding was another large part of the nursing care involved with this case. The patient had extensive faecal scalding, which occurred almost immediately after surgery as a result of faecal incontinence, which is an often-unavoidable complication of this type of extensive surgery (Figure 3). Management and prevention of further problems was key. Silver sulfadiazine cream (Flamazine, Smith & Nephew) was applied liberally to the affected areas after washing gently with warm water. This was chosen for its topical antimicrobial effects and skin-repair properties, and to reduce the risk of wound breakdown; it prevents and treats skin infections and burns associated with urine and faecal scalding. There was still some wound breakdown on the caudal aspect of the wound on days 8–10, but during the first retrograde study the wound was debrided and re-sutured to combat this. A buster collar was used throughout hospitalisation to prevent patient interference, which can cause catastrophic complications, such as wound breakdown and infection, tissue necrosis or sepsis. 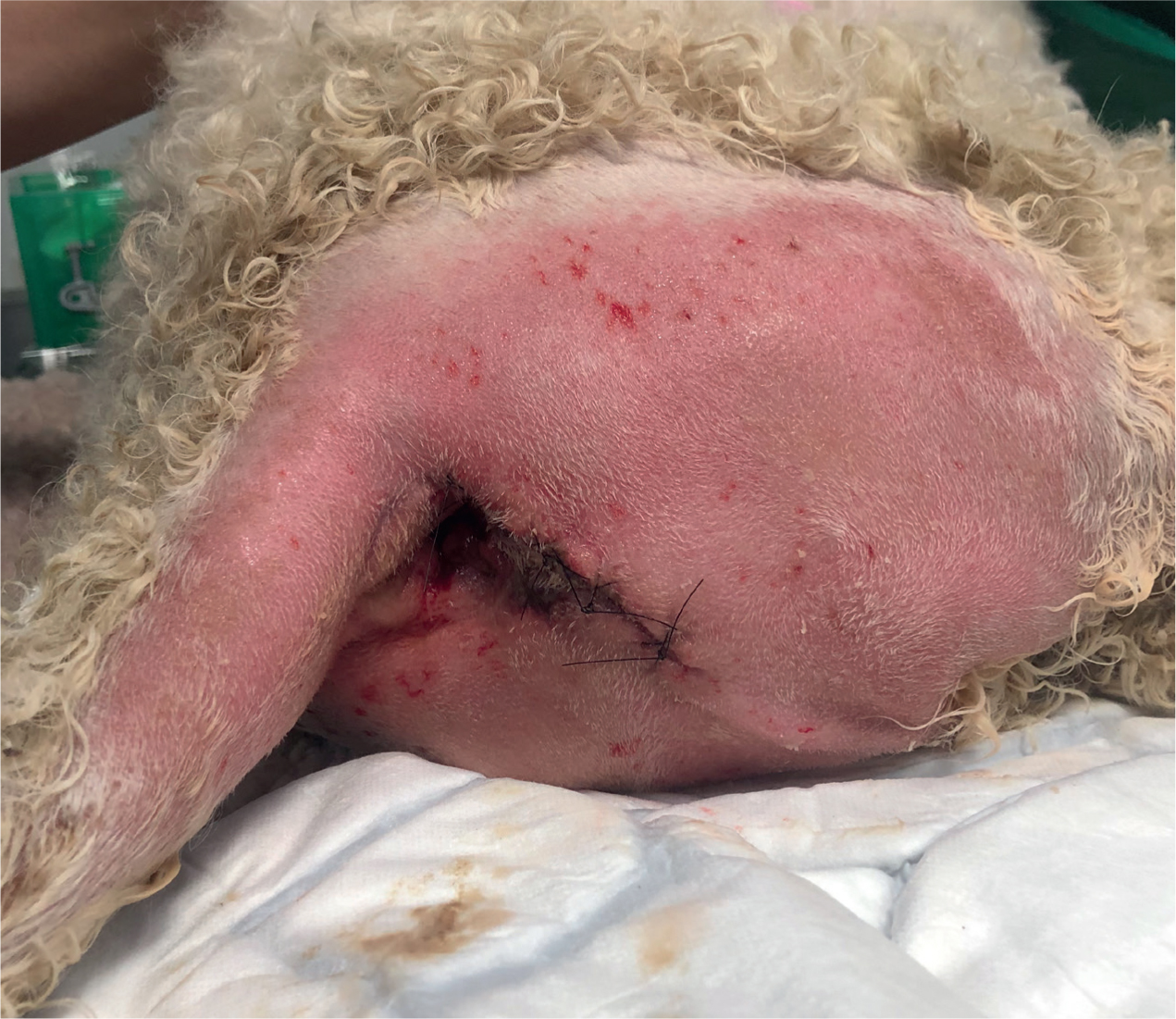 Figure 3. The patient developed intensive faecal scalding in the postoperative period. Because of the nature of the surgery, the perineal area was frequently soiled with faeces, so gentle cleansing of the skin multiple times per day was necessary with cool water, and barrier cream was applied frequently.

It is important to ensure that the patient's nutritional needs are met during hospitalisation, and it is a key factor in contributing to patient recovery (Corbee et al, 2014). This should be addressed early on during the hospitalisation period, as it has been proven in studies that early onset of optimum nutrition can reduce hospitalisation times in both animals and humans (Corbee et al, 2014). The resting energy requirements (RER) were calculated (30 times bodyweight in kilograms plus 70 equals RER in kilocalories per 24 hours) when the patient was admitted to hospital. In order to meet these requirements, the patient was tempted to eat with a variety of foods to encourage adequate intake. Warming of the food and hand feeding were also used to encourage the patient to eat. Water was also offered regularly to encourage hydration, as the patient had a buster collar at all times to prevent wound interference, which may have deterred drinking.

The patient underwent a urinary retrograde study under general anaesthesia on day 10 post-surgery to assess the patency of the urethra prior to removal of the urinary catheter. This involved instilling contrast medium into the urethra and then taking radiographs to assess for evidence of a leak of radiopaque dye from the urethral deficit. Unfortunately, there was evidence of minor leakage of contrast from the urethral tear, so the patient remained catheterised in hospital for a further 6 days. Repeat retrograde study at day 16 post-surgery showed a completely healed urethra, and the urinary catheter was removed. The patient passed urine 50 minutes after removal of the indwelling catheter and was discharged home the following day.

The patient was discharged home with oral cephalexin (Rilexine, Virbac) for a remaining 5 days and continued to make a good recovery. At the 3-month postoperative check it was reported that the patient was well in himself and not faecally incontinent. A rectal examination showed slight thickening to the tissue of the right side of the anus, thought to be scar tissue. There were no urinary concerns since the surgery. The patient will represent 6 months after surgery for abdominal ultrasound and rectal examination to check for reoccurrence of the tumour or metastases.

On reflection, this patient may have benefited from the use of constant rate infusions of methadone or another analgesic such as ketamine to allow improved titration of analgesia and to prevent peaks and troughs in pain management. Similarly, although faecal scalding did not become prevalent until after the surgery, it may have been beneficial to instigate the use of topical barrier creams such as Cavilon (3M) immediately after surgery in order to protect the skin from damage and hopefully reduce the likelihood of severe faecal scalding.

This was a highly intensive case but with a brilliant outcome. Nursing care was a huge part of the recovery of this patient, and despite the challenging nature of the case, reuniting the patient with his owners was extremely rewarding.

Keep up to date with The Veterinary Nurse!

Sign up to The Veterinary Nurse's regular newsletters and keep up-to-date with the very latest clinical research and CPD we publish each month.